Infinix is working on its smartphone series Note 10, which already has seen on FCC and Geekbench lists. More details have revealed the Infinix Note 10 Pro specifications and features in a leak retail box image.

According to the reports, a screen with a punch-hole in the center reveals the retail box of the “made in India” Infinix Note 10 Pro (model: X695) phone. It features a stunning 6.9-inch with a 90Hz refresh rate. 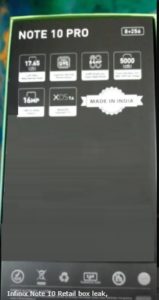 Infinix isn’t new to starting larger screen smartphones. If you see the Infinix Note 8 and Infinix Note 8i, the size of the screens is close to the upcoming device. But it’s surprising that the device seems to have a battery of 5,000mAh that is about 200mAh smaller than the predecessors while having a bigger screen. Furthermore, the leak indicates that the Infinix Note 10Pro has a MediaTek Helio G95 chipset instead of a G90T.

The Infinix Note 10 Pro cameras have a quad-camera design and expected to have a 64MP main camera. This camera setup will have features like Super Night Mode. On the front side, a 16MP Selfie shooter is said to be there in the smartphone. 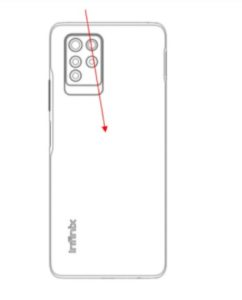 The Infinix Note-10Pro will be packed with a 5000mAh battery and fast charging of 33W.On the software side, it will build on XOS 7.6 based on Android, with 8GB RAM and 256GB storage option. The device will also have dual-band Wi-Fi (5GHz), Bluetooth, and GNSS for navigation.

Besides the Note 10Pro, Infinix is also working with the model number X693 and may be officially this number could be used for non-Pro Infinix Note 10 versions. We need to wait a little more till the official announcement.

You may be also interested in: Infinix fans can now avail of 12 GB free Zong 4G data on the purchase of a new smartphone