Samsung Galaxy S21 FE, one of the high-end devices from the Korean company is the most awaited one these days as it is packed with marvelous features. Just some weeks before the Samsung Unpacked event, where the manufacture will unveil all the products we are waiting for, it has dropped a masterpiece on its Instagram account, an image of the most rumored S21 FE. The theme of the ad in which the device is featured is Back to School where we have got some glimpses of the device along with a Galaxy Book laptop and what looks like the Galaxy Buds Pro earphones.

While the company posted pictures of the device on its official Instagram account, it seems that it accidentally leaked it as later on it was removed. 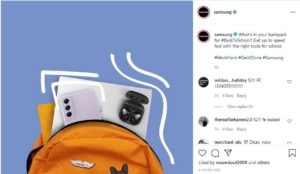 “What’s in your backpack for #BackToSchool? Get up and speed fast with the right tools for School”

The company in its official post did not mention the name of the devices. Since it looks like S21 FE, so it’s our own assumption. There are two reasons why I am confused about its launch. Firstly, the previous rumors suggested that the company will delay the device and will launch it in October which was previously announced to be launch along Galaxy Z Fold 3 and Galaxy Z Flip 3 in August. Secondly, Galaxy S21 FE is quite an expensive device as it is a flagship, so I do not think so that company will advertise it with the #BackTo School theme.

While many would be thinking that Why Samsung decided to postposed this device instead of launching it a company’s most famous unpacked event, the reason is chip shortage which has not only affected this Korean company but all the other company’s throughout the world.

As far as the features and specifications are concerned, the previous rumors have revealed that Galaxy S21 FE will come with a 6.5-inch AMOLED display featuring FHD+ resolution, having a 120Hz refresh rate.  Since there is no confirmation by the company, the device is expected to be powered by Qualcomm’s Snapdragon 888 chipset, coupled with 8GB of RAM and up to 256GB of storage. Other than this the rumored specifications of the phone include a 32MP selfie camera, triple rear cameras, and a 4,500mAh battery with faster-charging speeds than many of the best Samsung devices available in town.

Wanted to know about the latest prices of Mobile Phones and Gadgets in Pakistan? Head to PhoneWorld’s Device Listing Corner by clicking here and discover all at one place.

Also Read: This is the Leaked Battery Capacity of Samsung Galaxy S21 FE