The image of Samsung Galaxy M20’s Screen Glass has surfaced online. In the image, we can see a teardrop notch. However, the assembling of Galaxy M phones has also been started and now we will see more leaks time to time. It is the first time that Samsung is introducing a teardrop notch in the phone.

The screen of the phone measures 5.6” and it has been reported that the phone will feature a Super AMOLED panel with 1080p+ resolution. We have seen that the Galaxy phones usually come with LCDs in the lower levels but even the higher standing Galaxy A8s is also expected to come with LCD. 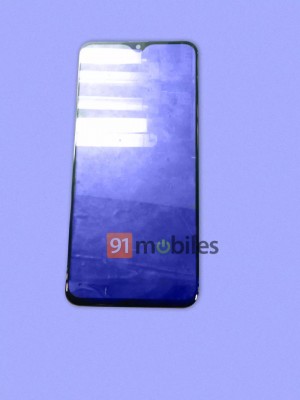 It is to be believed that the Samsung Galaxy M20 is going to impress the users tough it is an entry-level device but everyone is gonna love it. According to the Benchmarks, the phone will be packed by an Exynos 7885 chipset. This upcoming entry-level device is going to appear in two configurations, yes, it will come with 3/32GB and 4/64GB internal storage. The powerhouse of the phone will be fueled by battery capacity of 3,300mAh, but as it is just a rumor so let’s see whether we will get it at the time of launch or not.

In the image, we can see that there are no dual cameras. The rumors said that the phone will include a 16MP main camera on the back and a 5MP selfie cam.  We will hopefully see the device in early 2019.