WhatsApp keeps on testing new features for users making the app more reliable and user-friendly, however, some features are very useful. Do you remember days when you were not able to delete any message on WhatsApp and had to face backlash on sending a message that you shouldn’t have? Initially, to help people cope with it, WhatsApp launched the “Delete message for everyone” feature, which was loved by everyone. Keeping in view its growing popularity, the messaging app came with another feature ”  WhatsApp disappearing messages” that automatically removes sent messages within a time span of 7 days.

WABeta Info has reported that WhatsApp will enhance this functionality and is testing a new option that will automatically disappear messages after 24 hours. This feature is in testing for more than a month now and WABeta info has shared a screenshot that shows that currently this feature is being tested on iPhone only but maybe WhatsApp will launch it for Android later on too. 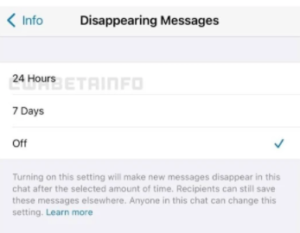 This news is not new for us as, we were expecting that the messaging giant will introduce different time span for this new feature as initially when it rolled out disappearing messaging, it said:

“We are starting seven days to offer “peace of mind that conversations aren’t permanent while remaining practical so you don’t forget what you were chatting about.”

The new option seems to be an addition to the 7-days option and will work in the same way. So admins or individuals can choose their messages including chats, photos, and audios/videos to disappear after the designated span of time.

Temporary content was introduced by Snapchat and Telegram already had the self-destructing messaging feature. Tweets news fleets also work in the same manner which means WhatsApp is not the first one to introduce this feature for users.