The iPhone 13 series debuted in September, offering a slew of improvements over previous versions. However, one significant feature that may be valuable in particular scenarios has been absent from the current iPhone family since its release. It’s the specialized noise-canceling feature that iPhone 13 customers have been clamoring for months. Apple, on the other hand, has yet to respond to consumer demand. The most recent iOS update does not provide a noise suppression option for the iPhone 13 series. However, it is present in earlier models. While on the phone, it’s typically a good idea to turn off any background noise, such as the television, radio, music, and so on. Your voice is picked up by the phone’s microphones in this situation, and the person on the other end may be unable to comprehend what you’re saying. For people who have difficulty hearing, this may be considerably more difficult.

On the Apple Community forums in October, a customer complained about the lack of a noise reduction option on the iPhone 13 Pro Max. An Apple Community Specialist reacted to the user’s complaint by providing a link to a tutorial on how to change the audio settings on the iPhone.

The provided link does mention Phone Noise Cancellation, which users of earlier iPhone models may enable by heading to Settings > Accessibility > Audio/ Visual. However, the option is not present with the iPhone 13. 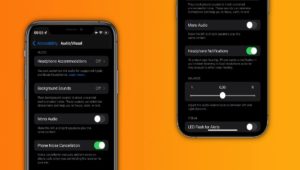 To tackle this, Apple has incorporated in iOS a feature that allows users to use noise canceling. However, the iPhone 13 still lacks noise canceling. It aids in the reduction of background noise that might degrade the quality of the call. For whatever reason, this is an accessibility feature that we’ve seen in the majority of iPhones. Apple has yet to reply to claims that this is a hardware problem; nonetheless, it looks to be a software error that has yet to be rectified.

Given that this problem was first noticed in October and that we’re almost at the end of the year. This indicates that it has been an issue for at least two months. Furthermore, Apple has failed to fix the iPhone 13’s noise canceling. When you consider how much Apple loves to talk about the accessibility features that they include in their devices. Due to the lack of a noise cancellation feature, iPhone 13 users are unable to choose whether ambient noise during phone conversations can be minimized while holding the phone to their ear. Users may, however, use the Control Centre to enable the Voice Isolation function, which works similarly to noise-canceling and helps you block ambient noises using machine learning.

Also read, iPhone 14 Will Not have a SIM Card Slot