The future of display devices is not just massive TVs, but South Korean tech giant LG’s nearly infinitely mutable OLED technology, which is now relocating to home furnishings and exercise equipment. LG Display will unveil a number of unusual and exciting flexible and semi-transparent display innovations at CES 2022, including a giant semi-circle chair home entertainment system and a new way to spin. Much of this is made possible by the native capabilities of OLEDs, which include self-emitting light (when charged) and an organic structure that allows them to be manufactured on thin, flexible substrates. LG Display, which, unlike LG Electronics, creates concepts that it hopes will inspire consumer-facing companies to create new products around, provided TechRadar with an early look at some of its latest OLED innovations. 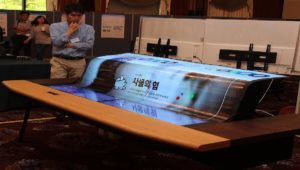 OLED is more than just transparency; it also offers flexibility. A large semi-circle seating system is featured in LG’s Media Chair concept. Inside, there’s a reclining chair and a curved, 55-inch LG OLED with Cinematic Sound OLED built-in (CSO). Inside the circle, both the recliner and the screen rotate in tandem, keeping the screen perfectly aligned with the viewer. Another twist is that the screen can rotate 90 degrees with the touch of a button. Similarly, LG demonstrated a Virtual Ride system that wraps a stationary bike rider in three brilliant 55-inch OLEDs, all curved to create a seamless viewing experience, from above their heads to the tips of their toes. LG calls it an immersive system, but there are no OLEDs on the rider’s left or right side. 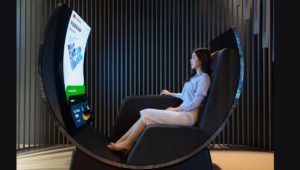 These and other LG OLED implementations serve as a reminder that these flexible displays can be found almost anywhere. Meanwhile, more mainstream TV manufacturers such as LG Electronics, Sony, and Panasonic are incorporating OLED technologies into Ultra HD and 8K-TV services. These are the areas where customers are most likely to come across this cutting-edge display technology. Still, these LG Display concepts provide an exciting glimpse into a future in which more surfaces become displays, but this will only become a reality if companies begin developing consumer systems based on these concept designs.

Nonetheless, it has the potential to make a boring spin rider feel more engaged as they cycle through the virtual countryside, just don’t look to the left, right, or below your feet.