Twitter has been exploring a paid subscription model for some of its features. App researcher Jane Manchun Wong tweeted Saturday that Twitter Blue is the tentative name given to the new service costing $2.99 per month. It will include an Undo Tweets feature and bookmark collections. Wong is expecting the service to work on a tiered subscription model, which could be less cluttered, and more of a premium experience for the highest paying subscribers. A Twitter spokesperson declined to comment on Twitter Blue saying that Twitter does not reveal new products before they launch. 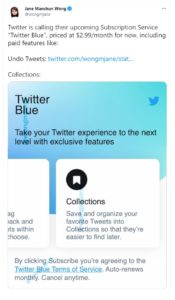 Social Media platform, Twitter has made a slew of new product announcements over the past several weeks, updating its warnings for potentially offensive tweets, improving its photo-cropping to allow “taller” images to fully present in user feeds, add Android user search ability to search their direct messages, and a Tip Jar feature to enable users to donate to some creators, journalists, experts, and non-profits (although that last one raised some privacy concerns about what user information is included along with the tip).

Twitter recently acquired scroll the $5-per-month subscription service that removes ads from websites that participate. Twitter also said that the Scroll announcement will end up with Nuzzel, a scroll service that sends the users of the top storylines to their Twitter feeds daily. 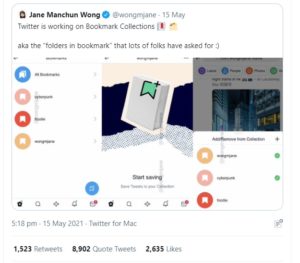 Tony Haile, the former CEO of Scroll who is now on the product team at Twitter, tweeted the day his company was acquired that Scroll would “integrate into a broader Twitter subscription in this year” One of the offerings of a premium Twitter product would be an ad-free experience, as well as editable tweets. There is no word yet on when a premium paid version of Twitter would launch, or what exact features would entail. The future for Twitter looks bright, and indeed very exciting.