In recent years, Microsoft has been on a game acquisition binge. Smaller studios like Double Fine, Undead Labs, and inXile, as well as major companies like Bethesda, Playground Games, and others, joined the Xbox gaming family. In recent investor calls, Microsoft also hinted that it plans to make more gaming acquisitions in the future, in part to boost the appeal of Xbox Game Pass, its ad-supported subscription service.

There are often new speculations regarding who may join the group, with companies like EA, Sega, and Capcom being mentioned as possible acquisitions. We don’t have any concrete information or knowledge about any impending Xbox acquisitions, but we do have some ideas on the sort of studio Microsoft should pursue, at least analytically.

Simply put, the mobile gaming business is enormous, and it has accounted for the majority of recent industry growth. According to Newzoo, the sector is expected to be worth $180 billion by 2021, with mobile spending accounting for 59 percent of that total. Mobile accounts for the majority of the increase, at 26%, while consoles and PCs account for less than half of that in the same time span. 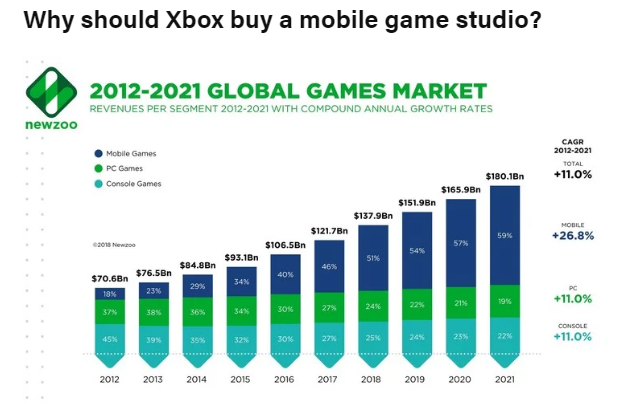 Microsoft’s official cloud gaming service is Xbox Cloud Gaming. During its brief beta stage, it was known as Project xCloud. It connects your phone to a cloud-based server that runs native Xbox games.

Xbox Cloud Gaming is ready to capture the cloud gaming crown in 2021, thanks to the backing of an outstanding Xbox Game Pass library. Depending on what you’re searching for, it might not be the best option for you. Google Stadia and GeForce Now, for example, may be a better fit.

Initially, the program was only available on Android phones. It has now expanded its reach to encompass Windows 10 PCs, as well as web-based support for Apple’s iPhone and iPad devices.

Microsoft’s most effective response to the PlayStation 5’s success is Xbox Game Pass. Several trailers and gameplay previews for future indie games were shown during the [email protected] Showcase, as well as several upcoming Xbox Game Pass titles. Aragami 2 (September 17) and Evil Genius (World Domination) are two of them (Q4 2022). Stardew Valley developer Eric Barone was interviewed during the event.